…
For a better experience please change your browser to CHROME, FIREFOX, OPERA or Internet Explorer.

From the development demand, Vietnam and many countries are allowed to import some types of scrap for recycling and putting them into production. However, recently, the situation of scrap imports has had many unusual developments, posing great risks. 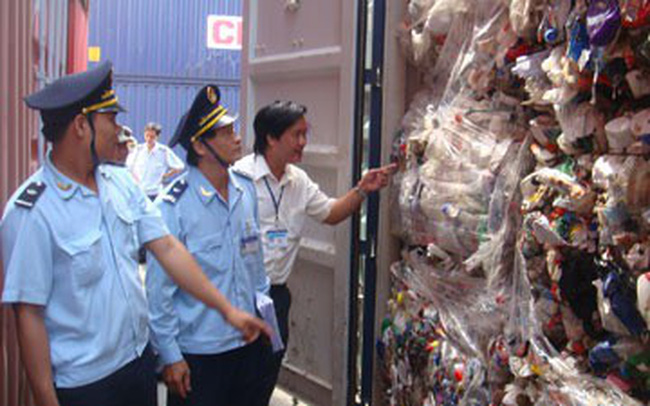 According to the Ministry of Natural Resources and Environment, the import of scrap as raw production materials for some industries is derived from actual demand. Currently, Vietnam allows to import 36 commodity codes of scrap as steel, paper, plastic …

The import of scrap as raw production materials, if well controlled, will contribute to saving resources and protecting the environment. According to calculations, if using about 1.1 million tons of scrap steel can produce 1 million tons of steel billet.

In recent years, the amount of scrap imported into Vietnam increased rapidly. In 2017, the total volume of imported scrap doubled compared to 2016. In particular, the volume of iron, steel, plastic, paper and sand slag are the types of scrap whose volume increased by 2-3 times the total volume. Import in 2016. Especially in the first 5 months of 2018, the volume of imported plastic scrap surged nearly 2 times compared to the whole of 2017.

This is a spike and abnormal increase, which is the direct cause of the scrap container backlog in Vietnam’s seaports.

According to the leader of Vietnam Maritime Administration, a large amount of scrap goods left in ports will cause serious consequences on environmental pollution and are expensive to destroy and handle.

In particular, the slow movement of goods in danger of being left in Vietnamese seaports has led port enterprises to repeatedly move the positions of containers in the yard or have demand for transportation between ports and ICDs. Other to contain. This increases costs for ports, customers, shipping lines and reduces productivity and efficiency of port operations; affecting the import and export activities of other Vietnamese businesses.

Since the end of 2017, the Chinese Government has issued regulations on stopping import of 24 types of scrap for recycling, including 08 types of plastic waste from domestic sources, 11 types of textile waste, 04 types of ore scrap and 01 type of paper scrap. In this list, there are a number of types of scrap allowed to be imported into Vietnam as raw materials for production.

According to experts, China is the world’s factory of manufacturing raw materials from scrap. Therefore, the ban on importing scrap for recycling will lead to countries that still export solid waste and scrap to China (such as the US, Japan, Korea, Canada, and Northern European countries.) .) will have to find new partners or import markets. This is one of the main reasons for the increase of scrap containers in seaports, especially plastic scrap.

Besides, there are many other subjective reasons. Some organizations and individuals importing scrap have committed commercial frauds such as forging certificates, using certificates of other enterprises, registering business addresses not in accordance with reality ( address ma ma), address change without updating but intentionally imported scrap does not meet the standards and regulations then abandon goods (derelict goods) causing backlog scrap at seaports.