…
For a better experience please change your browser to CHROME, FIREFOX, OPERA or Internet Explorer.

Many reasons are given by VCBS to prove that the possibility of steel price plunging below VND 12 million / ton is quite low. 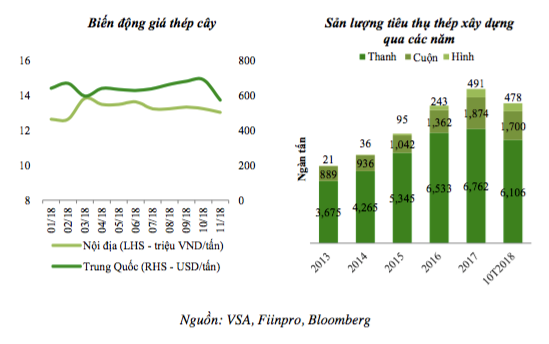 A new prospect for steel industry in 2020 has been published by VCBS.In 2020, the possibility of steel prices falling to below 12 million VND / ton is quite low because the additional safeguard tax will last until the end of March. / 2020, scrap steel still maintains at a relatively high level (350 USD / ton) compared to the period of 2015-2017 (250 – 300 USD / ton) with the import tightening leading to manufacturers from furnaces. Electricity will tend to import falling embryos from China for rolling.

In the scenario of the current price of raw materials, VCBS estimates that the break-even point of these enterprises will be about VND 12,035 million / ton, which is the minimum price of Vietnam market.

VCBS expert also said that China’s steel price fluctuation in 2020 will not be too big.

Steel prices in China increased sharply in 2019 due to two factors of speculation during the cutting phase, a change in market structure with a concentrated market share in the hands of major manufacturers (~ 40% and expectations). reach 70% in 2020). The end of speculative effect is the main reason for the decline in steel prices, but the less fragmented market will be a factor to support steel prices from a deep decline as in the past.

Also at the report, VCBS stated that steel consumption continued to grow due to strong public investment in the period of 2020, especially infrastructure investment projects are essential in the sustainable development of economy.

Accordingly, demand for basic construction products such as steel remains high. The Ministry of Industry and Trade forecasts steel consumption will continue to grow at a rate of 15% per year until 2020 (equivalent to 285 kg of steel consumption per person, the average of the ASEAN region).

In 2019, the price of steel in Vietnam increased rapidly and remained at over 13 million VND / ton in the second half of 2019, about 15% higher than the same period by benefiting from the winter-cut policy. in China is prolonged. Despite the increasing demand for production, the price of iron ore materials fluctuated within a range of 60-70 USD / ton. Accordingly, the profit margin of construction steel enterprises increased rapidly.

However, the situation has changed rapidly since the fourth quarter of 2019 when steel prices in China began to decline sharply due to the easing action to support China’s economic growth, showing the high possibility of progress of cutting back. It will slow down, increasing output during the period of high steel price has gradually surpassed the demand in the last months of the year in China.

However, the price of steel in Vietnam has decreased quite slowly compared to China thanks to the protected Vietnam market, the policy of tightening scrap imports and the increasing price of scrap steel in the world. Domestic production is at a high level (mainly in enterprises operating electric furnaces).

Accordingly, the room to reduce the selling price of the whole industry is almost no longer, leading to a quite big difference between the price reduction of steel in China and Vietnam (respectively -18% mom and -4.5% mom ).